Close your eyes and count to five. Done it?

That’s how long most of the moments on display at the Wild Planet exhibition would have lasted in real time.

This free outdoor exhibition at the Natural History Museum showcases over 80 images from the last 15 years of the Wildlife Photography Exhibition.

Through their expert knowledge of lighting, the rule of thirds and shot selection, the photographers have managed to capture some of the most intimate moments of animals in their natural habitats.

Tim Fitzharris caught two adult male northern elephant bull seals locked in a furious battle as the water lashed and whipped up around them.

So closely entwined are the animals in their fight that it almost appears as if the heads of the bulls are moulded together, creating a bizarre two-headed creature. 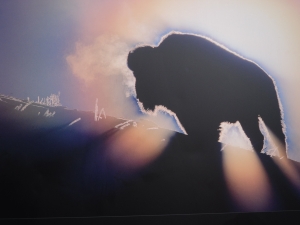 While some of the photographs capture moments of aggression and dominance, others border on witnessing a moment of spirituality.

In America’s Yellowstone National Park, Mervin D Coleman came across three American bison by the side of the road.

As he stood and watched, the sun came up over a ridge, silhouetting one of them, creating a rainbow-like aura around the woolly beast.

“It was a magical, almost spiritual moment,” says Coleman.

But it is not just the world of animals that is on show at the exhibition. The natural world, from Antarctic icebergs to Namibian sand dunes, gets a look in too.

Particularly memorable is ‘Lava by Moonlight.’ Looking as though it is a still from a B-grade science fiction movie, the image shows the lava flow from Ol Doinyo Lengai, Tanzania’s Rift Valley volcano.

So for a look at some of the most stunning shots of all that walks, crawls, slithers and swims on our planet, take yourself down to this wonderful exhibition.

‘Wild Planet’ is on until September 30 at the Natural History Museum. Nearest tube: South Kensington.

Originally posted on The Bowler Hat.

You are currently reading Review: Wild Planet Exhibition at akiwiinlondon.