She’s not the cheerleader! 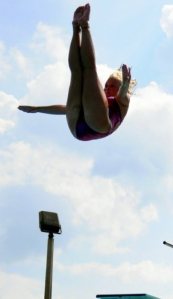 With her blonde hair, blue eyes and bubbly personality, it would be easy to mistake Jordan Claire Weber, 22, for being the quintessential American cheerleader.

But that’s where you’d be wrong. Jordan didn’t cheer on the athletes. She was one.

“I always got mistaken for a cheerleader – it made me so mad,” she says, laughing.

The truth is, this Florida native, born and raised “in the place where old people go to die”, in other words, St. Petersburg, was a diver for seven years from ages 14 to 20. Competing at collegiate level, Jordan did both one metre and three metre springboard diving.

As a Floridian, Jordan says that taking up water sports was a natural step. A swimmer for four years, Jordan did not think about diving until her high-school swimming coach pointed out that she was, “so short that he did not believe swimming was the sport I should be in.”

So Jordan segwayed into diving and was immediately hooked, even giving up 12 years of gymnastics to pursue the sport:

“Once I gave diving a try, I instantly fell in love with it. I even up and quit gymnastics to pursue this new and exciting sport. And what do you know – I loved it and did pretty well,” she says with a smile.

Doing ‘pretty well’ included coming first in the district and regional competitions during her final year of high school, despite diving with two broken big toes.

Her talent on the boards led to her studying a BA in Journalism and Mass Communications at Marshall University, West Virginia, on a full diving scholarship.

As with all athletes though, Jordan’s diving career had to end. Sadly for her, retirement came all too soon when she was injured three years ago in 2009.

During a partner stretching exercise, which went wrong, Jordan was left in “agonising pain” with a torn rotator cuff (that’s the left shoulder for you and me).

While some athletes, upon being forced out of the sport they love, sit and reminisce about their glory days, Jordan did no such thing.

Instead, when she was presented with the opportunity to become the head diving coach for Lakewood High School and share her passion with others, she leapt at it.

Talking about her coaching experience, Jordan describes it as one of the most frustrating but rewarding things she has ever done, likening it to being a parent:

“You will have nights with no sleep. You will stress out so much about your kids that you will not be able to eat. You only want the best for them and you see their potential and try to have them see it too.”

However, coaching a unisex team, most of whom were not much younger than herself, put Jordan in some very awkward and non-parental situations.

“The boys on the team constantly hit on me. And I had one ask me to homecoming and one asked me to prom. I said no to both – of course,” she says laughing.

When I ask if she would ever consider taking the sport back up again, at a competitive level, Jordan doesn’t hesitate to say ‘yes.’

However, she points out that the realities of life mean that returning to diving is not a possibility at the moment.

Currently studying a Masters in International Journalism at the University of Westminster, passing her course and finding a job are what top her list of priorities.

So what does the future hold for Jordan?

“I will let you know when I figure it out. Lots of things can change, I could get a job. I could get into law school, I could find myself meeting someone and hitting it off. Who knows?”

§ 2 Responses to She’s not the cheerleader!

You are currently reading She’s not the cheerleader! at akiwiinlondon.